It’s been nearly 20 years since I left that town with no desire to return.  Last week opportunity, nostalgia and curiosity more than anything else led me back.  Without realising it at the time, the short visit managed to slay a demon of sorts for me as well. Upon reflection I think part of this is because my sense of ‘belonging’ has been well and truly established somewhere else.

When many of us think back to ‘how things once were’ we think of the freedom, innocence and outdoor adventures of living in a small country town.  In this respect this town had the goods and was a great place to be a kid.  We could explore our surroundings without limits.  It was safe.  But as much as we reflect in nostalgia for how great it was, I also remember the hurry to get out.

Wyndham (population 505) is one of those towns.  It’s the type of town where everyone knows everyone.  Gossip is rife, but by well meaning, salt of the earth people.  It’s conservative Southland.  Little diversity, just white working class New Zealanders going about their life in an unassuming but flavourless way.  The only claim to fame that I can think of for the town is that according to her autobiography, Janet Frame once lived there.

We drive down every street in town (trust me, this didn’t take as long as you’re imagining), most are named after people and places of the Crimean war.  There was no body around.   No kids biking, or even at the playground. I don’t know anyone who lives there any more either. 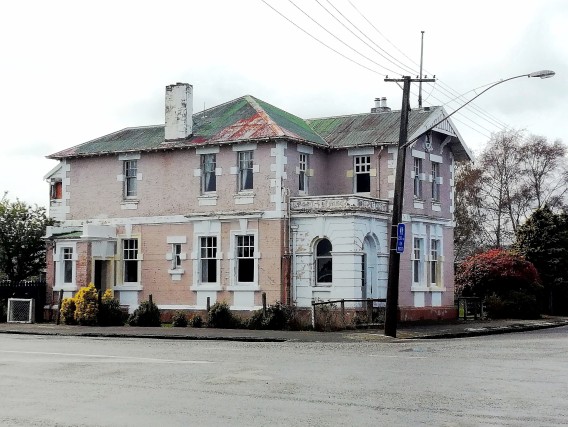 I was surprised how many heritage buildings there were for what had always been a small rural town.  That wasn’t something I noticed as a kid.  I was happy to see a handful of houses being restored, like ‘the Doctors house’ and noticed the Catholic church is now a private residence.   There has always been the odd empty shop on the main street, but I was astounded with how many more had joined them – and how many had been demolished.  Another telltale sign that things are quiet is seeing corrugated iron boarding up windows or rotten boards on a main street.  Like in movies.  The post office still grand, still the light pink it has been as long as I’ve known it – has missed out on the lick of paint that would have made it a landmark to be proud of.  I marveled at the main town intersection – which anywhere else would be a roundabout… here… a hodge podge of streets meeting.

I wander down some roads and reserves and reminisce about where I tried my first cigarette (which fortunately was a bad experience), saw a stash of playboys hidden in a bush, by who knows, and learnt how to start fires with dried grass and twigs.  I gazed over the fence which we used to go through to get to our swimming spot in the Mataura river.  The smell of that river has stayed with me.  I wonder how we were allowed to swim there unsupervised…  I’m struggling to remember if it’s always looked this vast.

Finally the high school beckons…   I was astounded at how small some of the buildings looked.  At least 25% smaller than I remember.  Though in essence it looks the same.  Native wood, formica and industrial metal lends itself to a timelessness.  Of all of the buildings, it’s the school hall that conjures up the most memories.  I re-imprint the school emblem above the stage. Integrity.  The rows of stacked wooden bench seats are still there.

I think about how many people like myself are holding their breath in assembly and class so they aren’t noticed.  How many hover at the back so they might get through another day without dying more on the inside.  Surprised at the memories that flood back.  Some good… more bad.  Everything looks more overgrown on the steps outside the hall.  Did it always look like this?  So sad?  I look at the grass field.  It’s massive compared to many schools now and I vaguely remember we had the biggest field per capita.  But it was never big enough to hide on.

Which brings me to wanting to tell you this, if you’re wishing away each day like I did.  You will get through this.  I got through it.  Each day drags; hell a lunchtime can feel never-ending.  Another year will pass, then another.  Then one day it’ll be over.  You wont need to endure it to get your education, placate your parents with your attendance and get your ticket the hell out of there.  Start again.  I wish I’d known how small that school was, how small that town was so that I might have been able to understand that it didn’t define me.  It’s not my home any more.  Who you are at school doesn’t have to be who you are when you leave.  Create a new life.  As many times as you want.  Don’t like your job change it.  Don’t like your town change it.  Move.  It’s up to you.  Breathe.  Dream and Go.  Get the heck out of there, this doesn’t have to be your home.  It’s not mine any more.

In writing this I am conscious of not wanting to offend those who live in or do love Wyndham.  I know there will be many.  The opinions are my own and share how I feel about a town that was once my world.