Well the rumours are true.  Hamilton’s Railway buildings on the corner of Victoria and Ward street are coming down.  I guess we all knew it would happen.  I kept hoping that they would be earthquake strengthened and repurposed.  Sure, it would take a little imagination, but it could have been beautiful given the chance.  It’s being demolished to make way for a new-build.  Hello to… another Bank.  It’s always a bank… a supermarket, or a gym.

I’ve always had a bit of a soft spot for this building’s architecture.

Look, I KNOW that the building had been under-utilised for a long time.  If Kiwi property income were letting the rooms upstairs out to artists and musicians over the last decade it’s a sure sign that they’re not particularly worried about the building.  I spent a few really awesome nights at gigs upstairs several years ago.  Come to think of it I’d be interested in how many local bands started out in those rooms.   The buildings sold more recently to Tainui group holdings – who haven’t been renewing the street front leases in the last few years – which is a sign in itself that something was about to happen.   Of late I noticed they’d started “work on it”.  I thought – ‘this looks promising’.  But, then… the more gutted it became, the more worried I got.  I started making enquiries over the weekend as to the future of it.  I’d always naively assumed that if it was going to be demolished completely that we (Hamiltonians) would know.  I was wrong.

Yes I agree a new building and business benefits the city, as it brings new people into the central city for work every day – a win for the businesses directly around it.  Yes it is great because they’ll do their shopping on their lunch-break instead of at the Base on Saturday.  But, it’s not a complete win as far as I’m concerned.

Was there no way to save this part of Hamilton’s heritage? I would much rather developers were creative and refurbished to keep the exterior as intact as possible.  Unfortunately business and retail aren’t the only things that build a great city.  We’ve had some awesome work done with the Central City Transformation Plan and the River plan, but – we’re still missing our heritage and arts.  They are key components you need to create, identity – vibrancy and community to a central city.

Leaving the facade of the Railway buildings  (and any other Victorian building in future) would help for people to feel a connection with the city.  You cannot do that with new-builds.  Hamilton has a reputation for destroying our heritage – but it’s not too late for what we have left.  If not for sentiment – but for character and identity. It is however, too late to stop the Railway building coming down, and I am actually really saddened by it.  But there’s no point playing the blame game here.  Hamilton can and will be a great city – we just need the right people working to bring it all together. 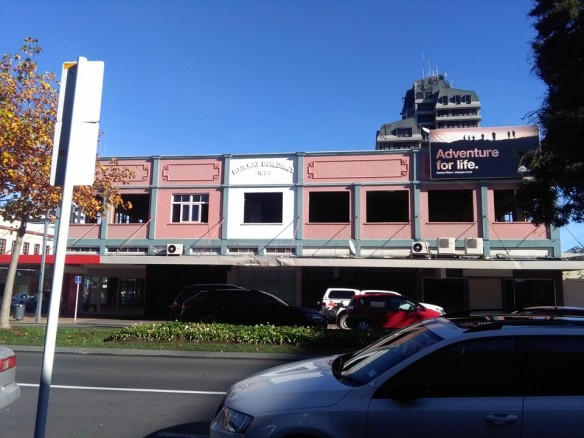 Add:  Today the Hamilton City Council announced a $100,000 fund to help owners of listed properties, as part of the Heritage plan.  This is a great step in the right direction.

2 thoughts on “Railways buildings, no more”